This large village, part of which has become the most famous spa of Podkarpacie, is known for the historic wooden church and the old manor house complex of the Załuski family.


Iwonicz first appears in historic documents from the beginning of the 15th century, and already in the middle of the 15th century it had the magnificent All Saints church, funded by the heir of the local estate Marcin Iwaniecki and consecrated in 1464.

The church was inspired by the pearl of Haczów, but it was remodelled too often to retain its original style. Still, it is bigger than the church in Haczów. This is thanks to the remodelling in the middle of the 18th century, which gave the church the wonderful organ gallery, and another one from the end of the 19th century, when the nave was extended, chapels and porch added, and the 17th century tower remodelled – it is several metres taller than the one in Haczów. Unfortunately, those last works, by giving the quickly growing number of parishioners a chance to fit into the church, took away the stylistic unity of the building, and thus also the chance for recognition in the world.

Still, as you enter it, you will be massively impressed by the richness and the high artistic value of the furnishings and the polychromy painting. The Baroque pieces harmonise with those from the end of the 19th century, created by the best artists from the region. The sculptures and gilding were made by Józef Aszklar from Lubatówka, who worked in Haczów, Iwonicz and Krościenko. The polychromy and many paintings are the work of Paweł and Jan Bogdański, a father and son from the family of painters from Jaśliska, famous especially for beautiful iconostases.

In one of the chapels, the Załuski family chapel, you can see plaques of black marble commemorating Karol Załuski and Amelia Załuska nee Ogińska, who came to their estate in Iwonicz from the faraway Lithuania and transformed part of the town into a lively spa resort.

Their family residence is not far from the church – the Winter Palace built in the 1880s for the next generation of the family. It is a two-storey brick building with a four-column portico and two bay windows on the sides. Both shorter walls have similar porticos supporting balconies, and at the back of the building there are two avant-corpses and a gallery with a glass roof between them. The building is in the middle of a landscape park. It has been thoroughly renovated and is now owned by the University of Rzeszów, who established there the International Centre for Ecological Education.

At the entrance to the park, there is another notable building, an old Arian church from the beginning of the 17th century. It was funded by the local landowner Jakub Sienieński, and converted into the manor’s granary already in the following century. The building is adorned with a beautiful, original sundial bearing the Sienieński’s family coat of arms - Dębno. It was reconstructed partly by the great expert on clocks Dr Tadeusz Przypkowski from Jędrzejów.

The way from the church to the palace leads through a unique stone bridge spanning the Iwonicz stream since 1782 and decorated with a coat of arms. 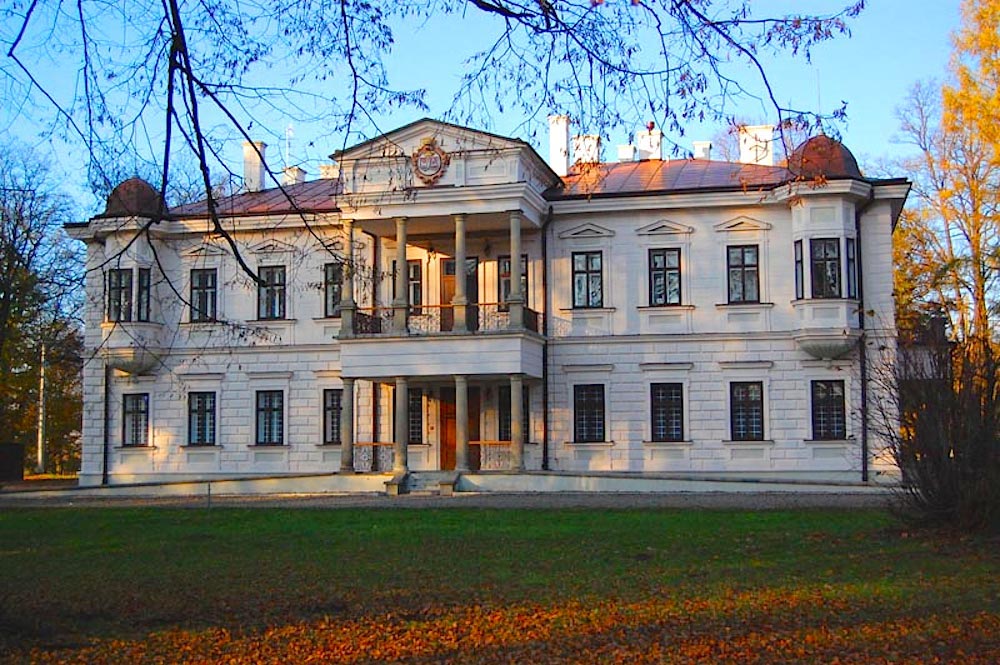