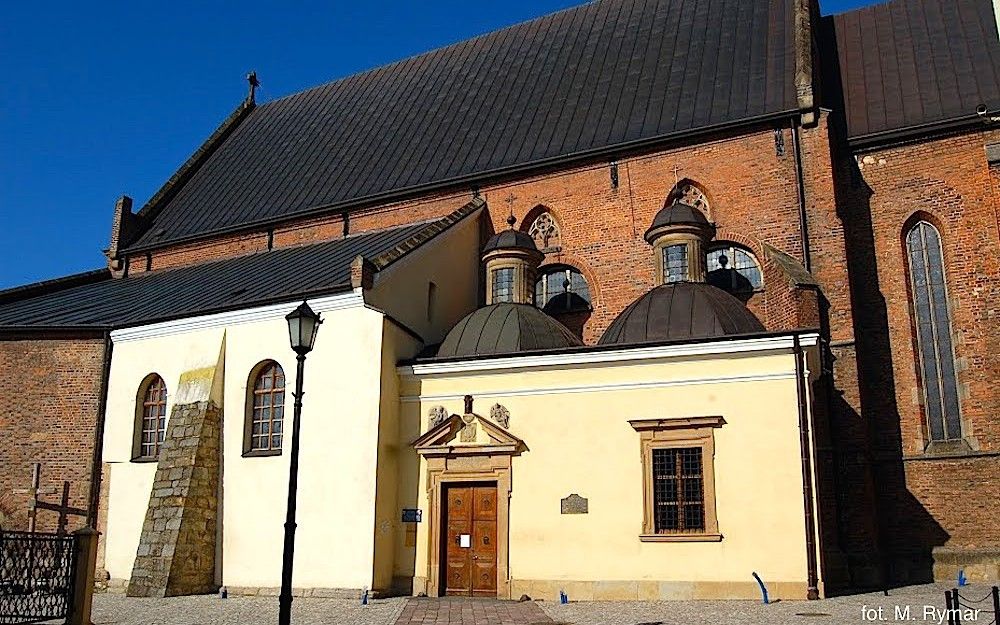 Holy Trinity Parish Church in Krosno is one of the most precious monuments not just of Podkarpacie but entire Poland. This wonderful Gothic church contains unique treasures of the town’s golden age. It is dated to the first half of the 14th century, that is the time Krosno was founded by King Casimir III the Great. The oldest part of today’s church is in the walls of the chancel. 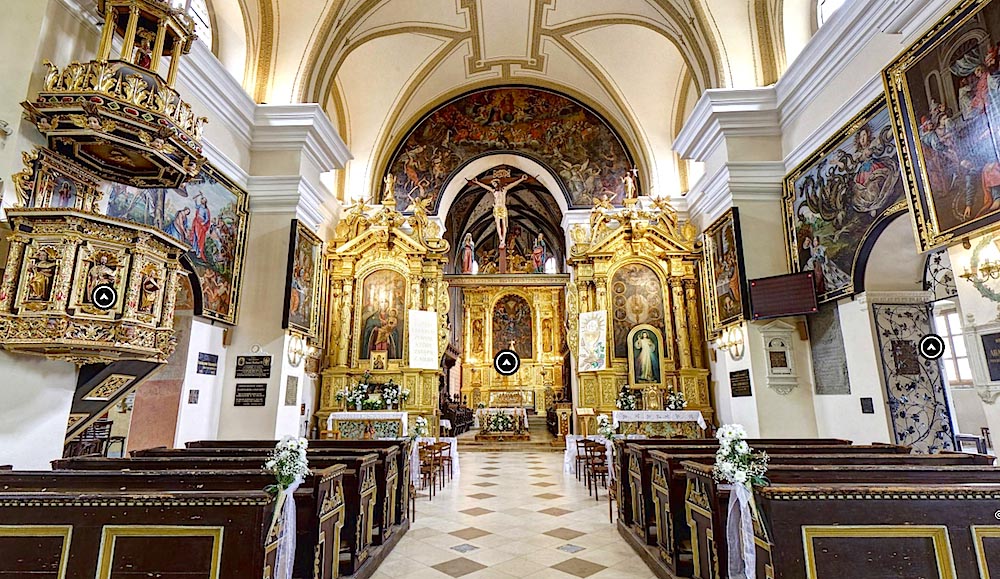 As Krosno was developing quickly, it needed a greater parish church and in the 15th century the temple was significantly expanded. This is when the expansive church with nave supported by five arches was constructed, on the west side incorporating a tower in the town walls. The sturdy walls of this part of the church testify to its old function and form one of the most picturesque nooks of the Old Town. In the course of the 15th and 16th centuries, the church also received new chapels, including St Adalbert’s chapel and St Peter and Paul’s chapel, the latter adapted by Wojciech Portius for his family mausoleum in the first half of the 17th century. Portius also funded many elements of the interior of the church, inviting outstanding European artists to work on it. One of them was Vincenzo Petroni, who worked for the Emperor’s court before he came to Krosno to convert the abovementioned chapel into the Portius’ family mausoleum and decorate it with phenomenal stucco. It has inspired admiration in anyone sensitive to artistic beauty ever since. One of its admirers was Stanisław Oświęcim, who commissioned Petroni to build and even more remarkable chapel for his family at the Franciscan church. The monumental Mannerist main altar is adorned with a masterpiece of another Italian artist – Tomasso Dolabella from Venice, royal painter of the Vasa dynasty in Poland, also brought to Krosno by Portius.

Another sign of Portius’ generosity (which must be admired even more when you remember he was a Scotsman!), though supported by donations from others, notably the then parish priest Kacper Rożyński, is the Mannerist-Baroque interior, unique on national scale, which has survived to our times virtually unchanged. The atmosphere of the place is largely created by the exceptional, monumental paintings in early Baroque style, combining the splendour of traditional Polish nobility and their fondness for life with the awareness of the evanescence of life and the inevitability of death – a vivid lesson on the past mentality which can leave none of the visitors indifferent.

The high artistic quality of the interior was achieved thanks to the fact that the abovementioned Dolabella supervised all of the painting work, and he was probably also responsible for the side altars, consistent in style with the main altar. The early Baroque atmosphere is enhanced by the splendid and numerous masterpieces of woodcarving. To name but a few, there are the choir stalls in the chancel, funded by Anna Portius, and the beautiful pulpit and pews, including the richly decorated patron’s pew of the Portius family. It is no overstatement to say that churches where the Counter-Reformation mentality of the Old Poland is so clearly recognisable are few and far between. Attentive visitors will also notice medieval treasures among the abundance of the Baroque – particularly the Gothic depiction of the Crucifixion on the monumental rood beam, one of the most valuable monuments of Gothic sculpture in Southern Poland, made in the capital city of Kraków around 1420. Another priceless piece of medieval art is the painting of the Coronation of St Mary by Jan the Great of Kraków, who was called this for a good reason. The canvas was created around the year 1480 and is unanimously thought to be one of the greatest works of Polish medieval painting.

There are also interesting tombs in the church, including the tombs of Jan Skotnicki, castellan of Połaniec, and his wife Zofia née Ligęza, owners of the Kamieniec Castle in the 17th century, and the tomb of bishop of Przemyśl Stanisław Tarło, who found shelter in the Krosno bishop’s palace from a Church anathema.

Take a virtual tour of the church 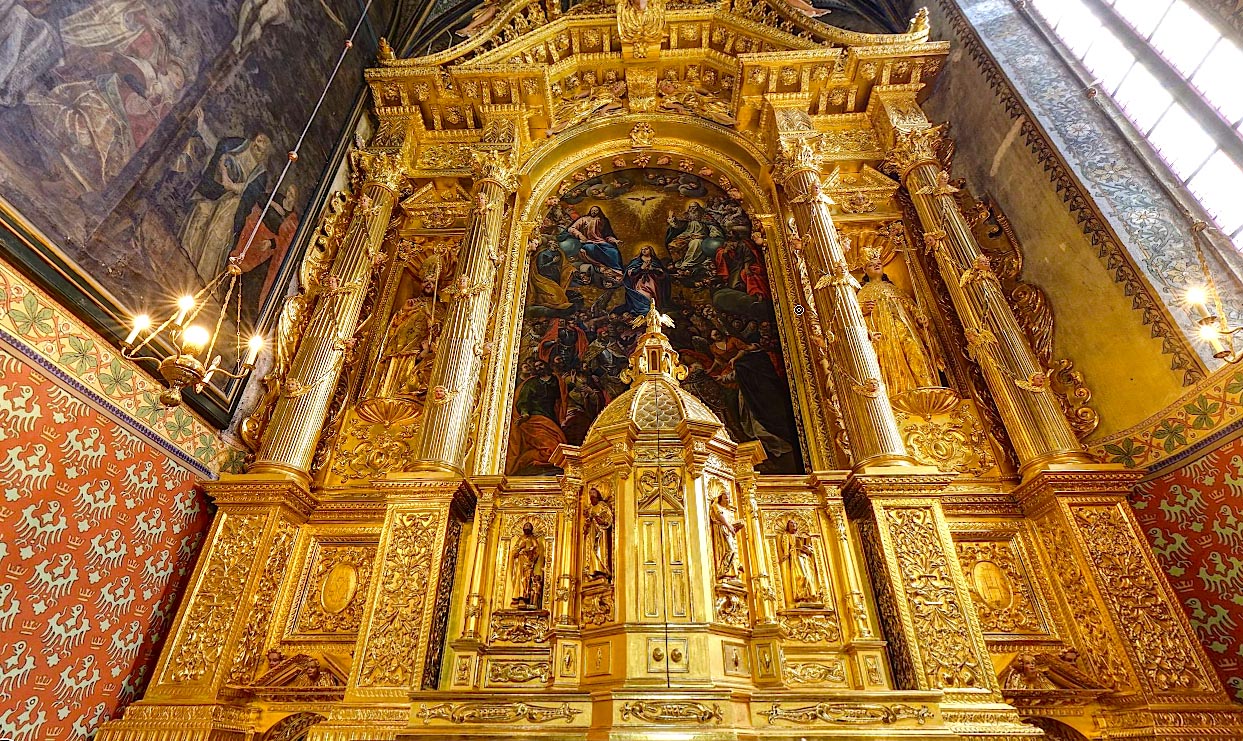